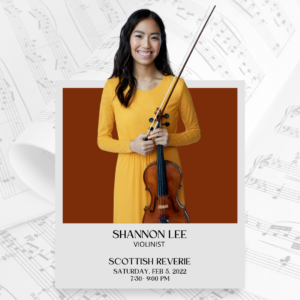 You will not want to miss our Scottish Reverie concert featuring award-winning violinist Shannon Lee.  Praised for her “remarkable fire, impeccable intonation, and big, vibrant tone” (Gramophone). She is a recent prizewinner in several international competitions, including top prize and audience award at the Sendai Competition in Japan, 4th prize at the Queen Elisabeth Competition in Belgium, 2nd place at the Naumburg Competition in New York City, and Laureate at the International Violin Competition of Indianapolis, where she was also recognized for Best Performance of an Ysaÿe Sonata. Her festival appearances as a soloist and chamber musician include Heifetz International Music Institute as Artist-in-Residence, Krzyżowa-Music, Music@Menlo, and Music From Angel Fire. In 2016-17 she was a founding member of Bicycle String Trio, performing at the Norfolk Chamber Music Festival and Avaloch Farm Music Institute. Shannon also received generous support from the Sylva Gelber Foundation in Canada through their Award for career development.

Born in Canada, Shannon began studying violin at age four in Plano, Texas. She made her solo debut at the age of twelve with the Dallas Symphony Orchestra, and two years later performed in Europe with Maestro Christof Perick and the Nuremberg Philharmonic. Other notable appearances include with the Tokyo Symphony, Antwerp Symphony, Belgian National Orchestra, and New York String Orchestra in Carnegie Hall. Her debut recording, Introducing Shannon Lee, features 19th and 20th century violin-piano works, which Gramophone Magazine praised for Shannon’s “technical command and fearless virtuosity.”

Shannon studies with Jaime Laredo and Jan Sloman at the Cleveland Institute of Music, where she has been the recipient of the inaugural Mary Hamlin Memorial Presidential Scholarship as well as the Starling Foundation Scholarship. She received a diploma from the Curtis Institute of Music in Philadelphia as a student of Ida Kavafian and Arnold Steinhardt. In Philadelphia, she also served as a Curtis ArtistYear Fellow under the mentorship of Mary Javian, developing the music program at Cramp Elementary Pre-K and working with All City Orchestra chamber music programs for high school students. Previously she completed her Bachelor’s degree in computer science from Columbia University while taking violin lessons with David Nadien. Shannon has also played privately or in master classes for Rainer Schmidt, Guillaume Pirard, and Boris Kushnir.