Tanya Satteson is a graduate of the Cleveland Institute of Music, where she earned her master’s degree in violin performance and was awarded the Dean’s Award for Academic Achievement. Tanya completed her post-secondary studies with Scott St. John, Gwen Hoebig, and Paul Kantor.

Tanya has attended numerous summer festivals, including the Banff Centre for the Arts and the Music Bridge Program. There she worked with many distinguished teachers, including Steven Dann, Pinchas Zuckerman, Sally Thomas, Desmond Hoebig, Yehonathan Berick, and David Cerone. Tanya worked as a full- and part-time member of the Winnipeg Symphony Orchestra for four seasons, was a member of the Cleveland Pops Orchestra for two seasons, and worked with the Academy Chamber Orchestra in Pittsburgh for three years. She has appeared as a soloist with the Winnipeg Symphony Orchestra, University of Manitoba Symphony Orchestra, and the National Repertory Orchestra. 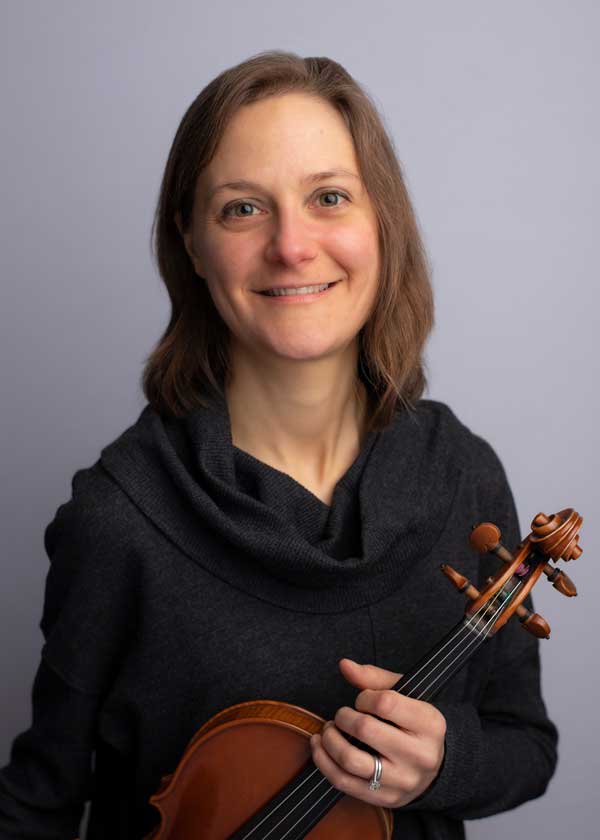 In 2006, she was appointed assistant concertmaster of the National Repertory Orchestra and was also awarded a generous grant from the Canada Arts Council to support her master’s degree studies. In 2008 she performed with the Winnipeg Chamber Music Society. In the fall of 2008, Tanya joined the Manitoba Chamber Orchestra on its North American tour. The group performed at six locations, including Vancouver’s Orpheum Theater, Toronto’s Roy Thomson Hall, and New York’s Carnegie Hall.

Tanya served as an early childhood music and violin faculty member at the Center for Young Musicians in Wexford, Pa., from 2007 to 2013. As a faculty member, she performed many solo community concerts and collaborated with her colleagues in chamber music performances. She has also worked as a freelance violinist throughout the Pittsburgh area since 2008, and in 2013 she was appointed concertmistress of the Butler County Symphony Orchestra.

Tanya completed long-term Suzuki pedagogical training and a teaching practicum with Kimberly Meier-Sims, director of the Sato Center for Suzuki Studies at the Cleveland Institute of Music. She has served as a Suzuki workshop clinician for the Academy of Strings in Tennessee, the University of Manitoba’s Preparatory Studies Division, and at the Cleveland Institute of Music Sato Center for Suzuki Studies. She is passionate about giving children the gift of music education and maintains an active home studio. She lives in Cranberry Twp with her husband Jason and their sons Mylan and Ari.